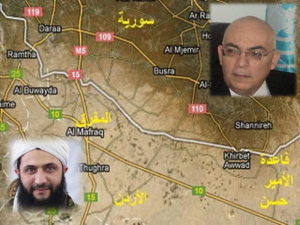 “The DESI European Department for Security and Information warns Jordan of the unsystematic adventure in Syria, and the Golani leadership of the Front”.

The DESI European Department for Security and Information noted that the intervention of the Hashemite Kingdom of Jordan on the Syrian crisis is imposed by the international coalition led by the United States of America, and Jordan has no ability to deter this request. The opening of this front in balance with the presence of American and British elements and Israeli intelligence officers is not in the interest of Jordan’s internal stability and things may go in a dangerous direction may not be under control, especially according to information received on the exit of “Abu Mohammed Julani” from Syria towards Jordan to lead the factions Opposition with other mercenary battalions. The Secretary General of the DESI European Department for Security and Information, Ambassador Haissam Bou Said, warned of the US State Department’s statement about Al-Joulani and the attempt to market him as a man of the stage in order to impose him as a leader for the next stage. He pointed out that the American plan in the form and the Israeli in the subcontractors to hit the remaining Arab institutions and drain their capabilities and hit the national unity. On the other hand, the Syrian southern front is not a picnic as the regional community believes. If the Israeli army cannot achieve it, Jordan or others will not be able to do so. The nature of the war is not of its own. Therefore, Jordan’s logistical possession does not match the nature of the battlefield. Internal and dormant cells are one of the points that may be adopted by those who support the system in Jordan in order to create creative chaos. Ambassador Bou Said hoped that the Hashemite leadership would be aware of this before it was too late because of the serious repercussions on the region and the world. The American president’s ambition and ambition to absorb the goods of all the Arab countries will eventually lead to a major destruction of all the Arab countries that are behind this abnormal expansion. In the end, the partition plan for the “Yinon” project will be present and ready to start implementing the section on Jordan.
← Previous Post
Next Post →